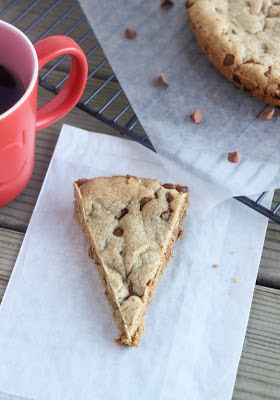 Photo and Recipe by: Bake your Day
Yield: 8 large slices

Preheat the oven to 350 degrees. Grease a 9-inch round baking pan and set aside.
In a small bowl, whisk together the flour, cinnamon, salt, cream of tartar and baking soda.
In the bowl of a stand mixer, cream the butter and Speculoos together until blended. Add the sugars and mix until combined and creamy. Add the egg and vanilla and mix for 1-2 minutes until combined and creamy.
With the mixer on low speed, add the dry ingredients and mix until fully combined. Add in the cinnamon chips.
Turn the dough out into the prepared pan and use an offset spatula to spread into an even layer. Bake in the preheated oven for 15-16 minutes, until the edges are lightly brown and set. Remove from the oven and cool in the pan on a wire rack.

Posted by Speculoos Spread at 6:14 PM